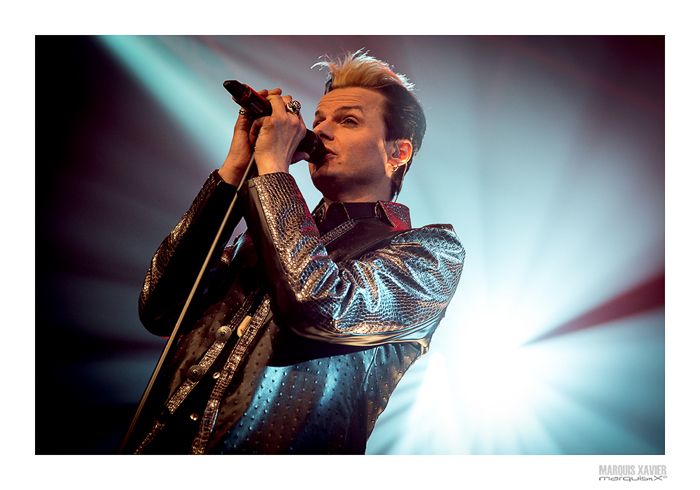 There were times when I could hardly believe that I would ever be able to finish the album.

Lacrimosa has delivered another beautiful album with ‘Leidenschaft’, in their well-known mix of gothic with symphonic orchestrated metal. We had the chance to discuss the record with mastermind Tilo Wolff, and the man appears to be quite philosophical as well as very religious. He denies that the record revolves entirely around the corona pandemic - as we initially thought - although he does address the subject. But let's just listen to what he has to say. 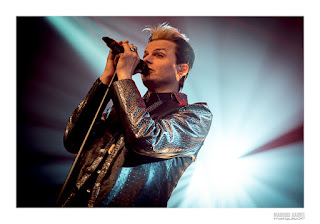 Dear Tilo. Congratulations with a new masterpiece. ‘Leidenschaft’ is, again, a great Lacrimosa album. When reading the lyrics, I couldn't help but notice that the title is linked with the corona pandemic. Is the subtitle ‘Eine Geschichte der entflammbaren Seele’ (a story of an incendiary soul) also connected to the pandemic? And does this make 'Leidenschaft' a concept album?
TILO WOLFF: First of all, thank you for your nice words about the new album! I am happy when people like it, because I love this album very much! And yes, somehow this is as much a concept album as all other Lacrimosa albums, because every album has its inner core around which all songs are circling. The name of each album sets the theme, and each song takes on this theme in its own way, explores and reflects on it. This is also the case here again, even though we didn’t divided the album in several acts. But this album is all about ‘Leidenschaft’, which can’t be translated one to one with the English word ‘passion’, because in the german word the meaning of suffering is part of the interpretation of the word. And this brings us to the subtitle, because to feel Leidenschaft is like burning from the inside! So this subtitle is not so much connected to the pandemic but more to the deeper meaning of the album title ‘Leidenschaft’. It is impossible to escape the topic of corona these days.
In ‘Kulturasche’ (Cultural Ashes), you lament on the way culture has been treated. Just at the time where we needed it the most, times of loneliness and fear, the culture sector was closed down. Did you suffer personally from the cultural lockdown?
TILO WOLFF: Yes, you describe it right. It is a crying shame! And in that sense, I am suffering in this situation. I didn’t suffer mentally in the lockdown, but I see how people lose their jobs and theaters, clubs and restaurants had to close, and I noticed how much the people would need culture and art in these bitter times! So yes, this song is all about the way how governments are blind for the entire picture in the fight against the virus – it is good and important to fight against it, but this fight should not turn against the people, but it did.
The song ‘Augenschein’ (Eyeglance) also deals with the pandemic, in particular with the heated debates about the restrictions, the vaccines, et cetera. You also sing ‘Not everything new is good for us / Not everything is progress’. What do you mean by this? 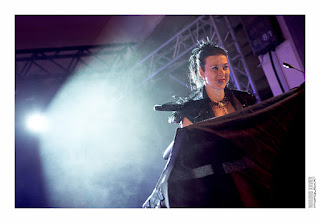 TILO WOLFF: This song is only partly about the pandemic. The phrase you picked out is about the believe of every upcoming generation, that they would know everything better. If we look back into history, we clearly can see that this is not the case. Many people only see their own state of mind and their own personal needs and are blind for the big whole. For example, take the climate crises. People living on the countryside, taking care about sustainable cultivation and the environment, are attacked as environmental polluters when they drive to the city with their SUVs, which they need out on the countryside because of the lack of public transportation and of proper roads out there. Just the same, which topic we pick out, too many people think they know best without having in mind, that they don’t see the entire picture.
The song ‘Die Liebenden’ (The Lovers) seems to bring salvation, and goes back to a classic theme in the lyrics of Lacrimosa: love. The pandemic has restricted our freedoms, but freedom can always be found in true love. Is this the message of the song? Can you elaborate on that?
TILO WOLFF: This album is much less about the pandemic as you might think. I wrote this song before Covid started, but yes, I think that freedom is to be found in love. This brings us back to the previous topic, because I have the feeling that the people unlearn to be caring for each other. Everyone is busy with themselves in striving to optimally expand one's own freedom, forgetting that personal freedom only extends as far as the state of mind of the other person. Jesus said it perfectly: “Treat others always as you would like them to treat you” (Matthew 7:12). This says it all, but well, every generation thinks they know it better…
In the video for ‘Raubtier’ (Predator), you introduced two new characters: Jean-Gustave de Geulasse and Lacristobal, both played by yourself. Can you tell us more about these characters and why they entered the world of Lacrimosa?
TILO WOLFF: Haha, yes, my new friends and enemies. Well, Jean-Gustave of course is my arch enemy, the one who should have no reason to be respected in our society, he stands for all those selfish, self-centered people who make the life of others miserable. Well, and Lacristobal is my alter ego, full of passion and desire, living like a ghost inside of me.
You also choose to play almost all the instruments yourself on ‘Leidenschaft’. Only Anne Nurmi and drummer Michael Mohr are present on most songs, with some appearances of JP Genkel and of course the Lacrimosa Session Orchestra. Why do you choose to play almost everything yourself rather that asking more guest musicians to play on your album?
TILO WOLFF: That was on one hand due to the pandemic. Most of the time, it was nearly impossible to plan recording sessions because traveling was not so easy. On the other hand, it was the most natural and direct way to capture all the emotions and all the little details I had in mind. It’s the pure Lacrimosa way! 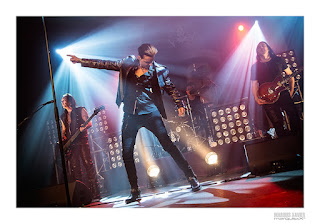 You chose to release ‘Leidenschaft’ on the day of Christmas. We know that you are a devote Christian. Is this the reason that you chose Christmas, or did other things also played a role in your decision?
TILO WOLFF: Actually, the reason for this decision was, that this album is something very special for me. To record this album was an unbelievable journey, it was nerve-racking, exhausting, intoxicating, uplifting and sometimes devastating and there were times when I could hardly believe that I would ever be able to finish the album. After it was completed I was so thankful and happy that it felt like becoming the most wonderful present. Well, and this was the idea to bring it out on Christmas, a present for all Lacrimosa lovers!
Speaking of Christianity. You have said before that you are also active in your own Christian community. I always wondered how the other people in the community reacted towards this extravagant gothic artist that you are...
TILO WOLFF: Well, they know me and they take me as I am. This is the Christian way, as one can read in the scriptures: “For not as man judges – for man judges according to the eyes, but the LORD judges according to the heart.” (1Sam 9:2) True believers are living in the knowledge, that every person is a creation of God, and that God loves everyone. So, who are we to judge others?
If I remember well, when you released the compilation ‘Zeitreise’ in 2019, you promised a new Lacrimosa album in 2020, obviously in the light of the 30th anniversary of Lacrimosa. You even included a song on ‘Zeitreise’ that was supposed to be on the new album. Can you tell us why the album was delayed and why ‘Im Schatten der Sonne’ is not featured on ‘Leidenschaft’? Did you write more songs that are not featured on ‘Leidenschaft’?
TILO WOLFF: The delay was due to the pandemic situation. I so much wanted to have the new studio album out to celebrate the 30th anniversary, but Covid came into the way. And yes, I wrote some more songs and about “Im Schatten der Sonne” it turned out that it was the perfect link between “Testimonium” and ‘Leidenschaft’ – just last night I heard the song again and got convinced again that this was the right decision, even though I love this song, it was a pleasure listening to it again – though it does not fit into the concept of ‘Leidenschaft’ as much as all the other songs that found their way on to this album. 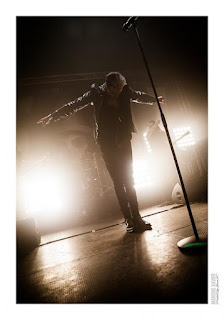 In 2020, you released the ‘30th anniversary box’, a box with three CDs and lots of other things like a kalender, a flag, a memory game... This box was sold exclusively through the Hall Of Sermon webshop. I love the CDs contained in the box, especially the ‘Live 2015’ CD. What was the idea behind the box and why make it an exclusivity for only your hand-core fans?
TILO WOLFF: After I realized that ‘Leidenschaft’ won’t be ready for the anniversary, I wanted to fulfill my promise, in coming up with something new, at least in this sense, and to give the audience something special, to make the people happy in this special year! This was the idea behind this box and therefore it only come through our shop because it was meant to be for our closest audience, those who are living with Lacrimosa.
I want to finish with a question about an earlier album. ‘Echos’ is a disc beloved by many of your fans, internationally. The record was perhaps a very difficult one again. This is the only post-1993 album that was not followed up by a tour, and only a limited number of songs can be played live, due to the importance of the symphonic orchestra on ‘Echos’. What were you aiming at with this album and what other important things should we know about this classic?
TILO WOLFF: One thing is to be known, is that the people didn’t like the album at all when it was released. One big metal magazine even told me that they would no longer write about Lacrimosa, because Lacrimosa has turned its back to metal with this album. Yes, this album was not treated nice either by the Lacrimosa audience and also not by those who never liked Lacrimosa. I was a little confused back then, because I myself was very happy with this album, I thought it was a masterpiece, but with this in mind I was quite alone back then. Well, I was surprised to realize, that many years later some people popped up telling me that this would be their favorite album. I thought ‘where are you now coming from and where have you been all these years’. Yes, sometimes things are pretty weird.
Lacrimosa: website / facebook
Pictures: Xavier Marquis