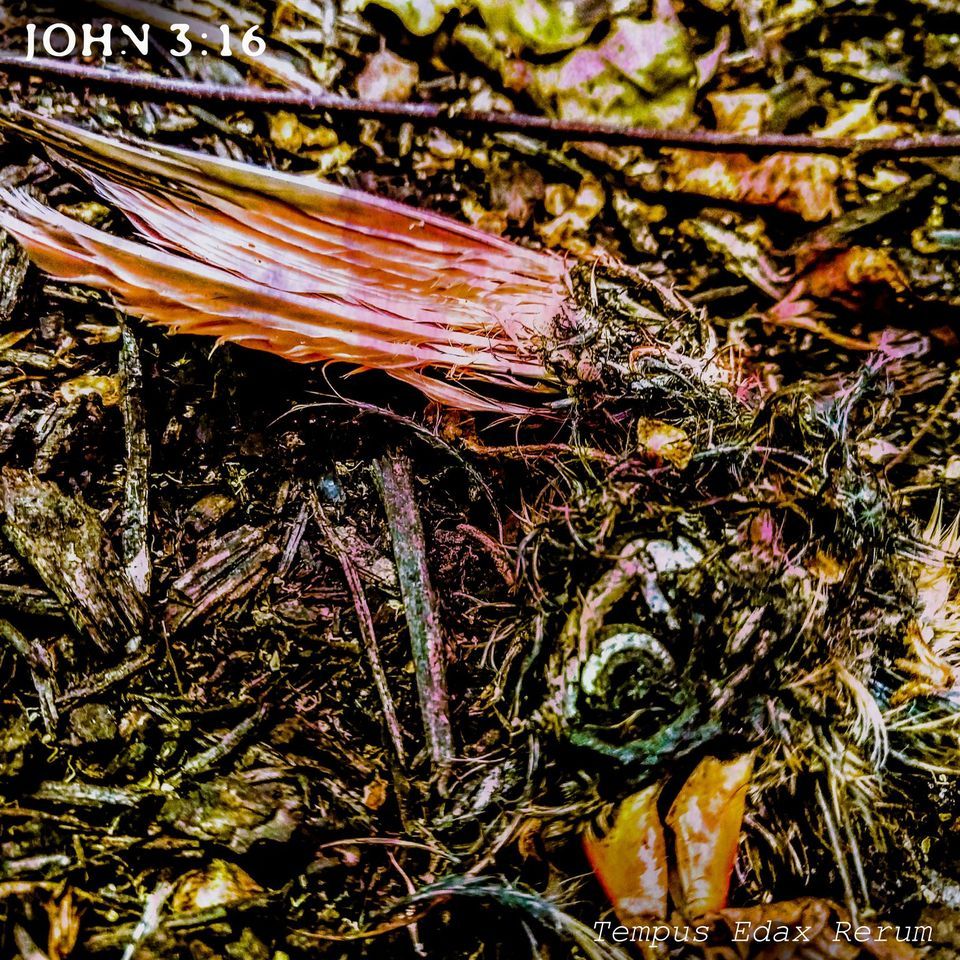 I regularly come across animal remains at various stages of decomposition. That started to affect me, and that's where the concept of the record was born. 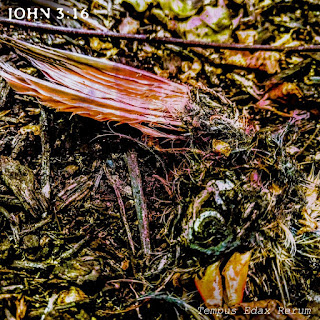 Music from the depths of hell, slowly rising in a lava flow with the intoxicating scent of steaming sulfur exuding from the cracks, gradually engulfing the earth, sowing death and destruction, leaving only jet-black cold ashes behind it ...' This is the way we started our review of 'Tempus Edax Rerum', the new record from JOHN 3:16.Since we were overwhelmed and intrigued by this rare knot of sounds, we decided to send some questions to mastermind Philippe Gerber.

Hello Philippe.We are very impressed with your new record 'Tempus Edax Rerum'.Are you satisfied with this new work?

Hi Xavier.Thank you for your kind words.I am  aware that it is a record that is difficult to approach.The songs are long and contain lots of unique sounds, which correspond to different music styles at the same time.I believe I'm satisfied, and that with some distance this will prove to be a sustainable work, because it is very personal.

We can see a connection between 'Visions of the Hereafter' in 2012 and 'Tempus Edax Rerum' in 2020, but we also see differences.How has your sound evolved since 2012?

'Visions of the Hereafter' was also a very personal album. For this record, I started from a very specific theme - the concepts of Paradise, Hell and Purgatory in the monotheistic religions and their representation in the arts, especially in painting - and I had the global dynamics of the record already in my head. The titles of the opus and of the songs were also already fixed before I started working on the music. I have used the same approach for 'Tempus Edax Rerum'. I had the title in mind and the notion of a collection of movements that follow each other long before I recorded the very first note. 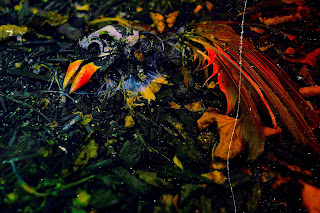 What is different, however, is the production. I do believe I have progressed in eight years, especially with regard to the sound of the drums. I have been working for Ruben Nava / Music Junkies in Los Angeles for three years as a composer of music for trailers, films, TV series, et cetera. Ruben is a music director with an incredible musical culture. He has helped me to get out of my comfort zone, especially with regard to anything rhythmic. Of course, that has reflected on my production work with JOHN 3:16. 'Visions of the Hereafter' presented very different rhythmic productions. There is more cohesion on 'Tempus Edax Rerum': the soundscapes of the keys merge with the sound of the guitars. It is sometimes impossible for the listener to perceive all the sounds. I've been lucky enough to work with Carolyn O'Neill, who put her voice and a number of instruments on a song. She also participated in the composing of 'Visions of the Hereafter'.

You present 'Tempus Edax Rerum' as the sequel to 'Visions of the Hereafter'. However, you have published a lot of work in the last eight years, between the two albums. Why is it a sequel to this 2012 record?

'Tempus Edax Rerum' is officially the second album from JOHN 3:16. It is the coherent sequel to 'Visions of the Hereafter'. It is true that I have released a significant number of records: records in collaboration with Mark Harris and Anthony Donovan, a compilation of b-sides, EPs and singles (including '200 Million Horsemen' and 'Sodom & Gomorrah'), a live bootleg and I even had the chance to re-release 'Visions of the Hereafter' on cassette (with the first EP 'John 3:16' as a bonus) via Cruel Nature Recordings from England. I recently made a remix of NIN ('In This Twilight') together with the Belgian group Be The Hammer, with whom another collaboration project is ongoing. All these releases between 'Visions of the Hereafter' and 'Tempus Edax Rerum' helped me to forge the sound you hear now. I've taken the time to edit the sound of the guitars in the studio, I've gone to the trouble of playing some drum parts live, and I've even dusted off some of my analog keyboards. These eight years were essential to find a new direction and a fresh identity. 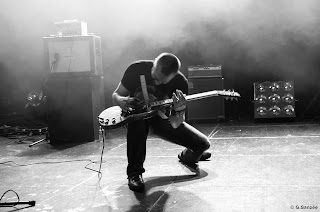 You made a special and limited version of the record in which you transformed your songs - five tracks on the digital release - into two pieces on cassette.What important decisions did you have to make to make that happen?

I composed a set of 30 songs for 'Tempus Edax Rerum', resulting in over 10 hours of recordings.For the cassette version, I wanted to do something unique by adding two unreleased tracks hidden in two long tracks: 'Mors omnibus' and 'Mors vincit omnia'.It was not that difficult to do as 'Tempus Edax Rerum' is a set of coherent movements which production is homogeneous from the first to the last note.

The songs on your cassette are called 'Mors omnibus' (death to everything) and 'Mors vincit omnia' (death will overcome everything). Death seems to be a prominent theme on your new record. Why?

I've lived in Pennsylvania since 2013. I'm close to Philadelphia, but I'm in a part of Pennsylvania that's still pretty wild. This contact with nature - in a quiet place, in a sense - is necessary for me to compose. Part of where I live is lost in a forest where deer, fox, vultures, eagles and others apprehend each other on a daily basis. I regularly come across animal remains at various stages of decomposition. In a way, that started to touch me, and it is there that the concept of the record was born. The art used for the digital version and for the cassette is composed of photos I have taken over the years, which is a means for me to pay tribute to these graceful creatures. 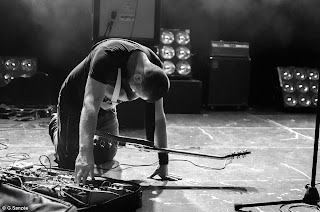 The religious references seem to have disappeared. In a previous interview, you told us that religion is the main theme of JOHN 3:16. Is this still the case?

'Tempus Edax Rerum' deals with a universal notion - that of a beginning and an end to everything - that is linked in a way to 'Visions of the Hereafter'. In Christianity, for example, the notion of immortality is not natural to humans. Even if one wants to believe in an afterlife, death is an indispensable step that one must accept in a serene way. In Hinduism, death is only suffering, and that justifies the various rebirths until one has reached one's true Self. So, to answer your question: yes, JOHN 3:16 is mainly inspired by religion in the broadest sense of the word. It is mainly occultism in religions that is the focus of attention.

It took you eight years to make a sequel to 'Visions of the Hereafter'.When will the sequel come? 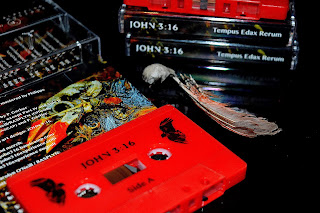 I am working on the next full-length, called 'The Pact'.The theme is fixed.It will be based on the Faust myth, mainly influenced by Goethe's written tragedy.The record should be released in 2022 or 2023. The label has yet to be confirmed.The artwork is already finished.The Mexican artist Nestor Avalos has been responsible for that.He has worked with such bands as Moonspell, Mercyless, Iscariot and others.One song is already in the final mix phase.I will put an extract on my page in 2021.